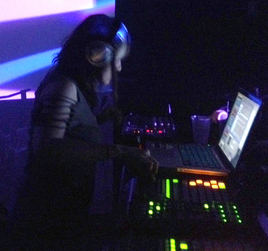 Ms Melotronix, based out of Oakland, California, is a music-maker, producer, and vocalist. She brings her own twist to the "art of noise". Armed with her turntables, dj controllers, beat machines, mixer, laptop, and microphone, she blends heavy chunky funky bass lines with etheric overtones (of flutes, harps, sitar, and more), and add an overlay of vocals to the mix. For over 20 years, Melotronix has been mixing dope tracks & producing her own music. She comes to the stage with an arsenal of tracks that you will not hear anywhere else. Combining old-school classics and original tracks with the latest releases - selected by the mixtress, you'll be taken on a sonic adventure that you will not soon forget.

Melotronix moved to Montreal for college and had the pleasure of living below musical innovator Kid Koala. Her first experience with the Technics 1200s was on his decks and after a long night of mixing and scratching, she was determined to get her own set. She started to experiment in the realm of turntablism, house, hip hop, and started to collect an eclectic set of vinyl ranging from electronic music, to Sesame Street, to strange wax from the 70s. She moved to NYC at the turn of the century and had a chance to rub elbows with the folks that were putting on many of the events at Limelight, Sound Factory, and in the DUMBO (Brooklyn) loft parties, as well as other music venues and art galleries around the city.

Melotronix lived in Tempe AZ (Phoenix metro area) and this is where she really found her "musical voice" DJ-ing, singing and performing all over the 5th largest city in the country. In 2004 she had her first gig at Essential Wednesdays alongside Queen Be, Jackelope, Diva, and visuals by Ghostmeat. She continued on to play: clubs, lounges, underground events, private parties, art galleries, outdoor music events, festivals, fashion shows, fancy restaurants, (including the BioDome!)... You name it, she's played it - in Phoenix, Scottsdale, Tempe, as well as up in Flagstaff.  Melotronix was one of the first regular DJs for the northern Arizona Culture Shock monthly events, as well as other legendary weeklies, monthlies and one-offs in the Valley of the Sun.

In 2008, Melotronix joined the San Diego BrokenBeat crew, and performed at many of their now legendary monthly events, known for pushing the boundaries of emergent broken beats, bass, glitch, dubstep, and breakbeat styles of music in California and beyond.

In the summer of 2012, Melotronix moved to the Bay Area with Griffin One, and set up a mad sound scientist studio in West Oakland. These days, she continues to blend her bass beat tracks with melodic washes of immersive sound, binaural beats, synchronic tones, ethereal music, and intergalactic vocals. She creates music and soundscapes for your mind body and soul.

Take a moment to check out her Mixes and Songs, and if are interested in booking, get in touch via the Contact Page, or email melotronix@gmail.com